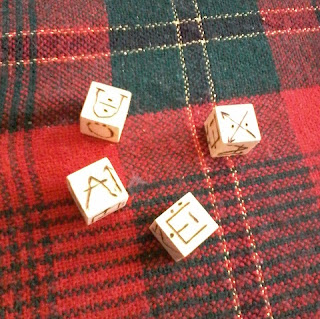 Magical games are not only fun, but they also serve as a powerful magical tool.  These games can be used as divination tools; they can also deliver magical energy and insight in unique and unseen ways.  Games serve as a manifestation tool and can open an unusual energy space.  They sustain and release a high vibration of energy as they are played.  All the magical games and the symbols they may contain are Andromedan in origin.


These games can be either played alone, with an opponent or a few players in a group.  Magical games are taught at the first and second levels of Lanterum.  The second level includes the board game Elfkyr, and a Games Appendix will be available to all Lanterum magic practitioners.  In order to play these games, one should have at least the first wand activation in Lanterum.  Those who do not have any background in this magic can play these games, as long at least one player is a Lanterum practitioner.  Children can also play these games.


In Lanterum magic, there are various types of magical games:


There is only one kind of dice in Lanterum magic. It consists of six symbols on a dice, which has different uses.  The dice can be used alone as an oracle or can be used with board games and marble games.


It is a deck of 48 cards, divided into four suits. They resemble a deck of playing cards or the minor arcana of the tarot.


This game of chess uses the same pieces as the ‘conventional’ chess.  However, the positions of the pieces vary in the Andromedan chess game, and uses different sets of rules. Andromedan chess can be played alone.   The chess board is also modified, and has magical symbols on some of the squares.


These games are played with Lanterum cards, special cards that come with the game and the Lanterum dice. Elfkyr is a competitive game and includes keeping a point score.  Firnith is more spiritual and resembles a Ouija board. Both games can be played alone and with up to six players.  Both Lanterum board games are open to the public as long as one player is a Lanterum practitioner; children can play them.


There are five different marble games in Andromedan magic.  In the scope of Lanterum magic, only the first two are available to the public for now.   Marble games are very soothing and grounding.  The spherical shape of the marbles is reminiscent of the planets and is a perfect tool for grounding in magic.  The first marble game requires a marble mat which contains five symbols.  It also uses one or two clear rock quartz crystals.   The second game does not require a marble mat however it is played with two Lanterum dice. Those who have Emergentus have the option of using the Emergentus numerical dice.

Beginner Andromedan Magic for the general public, free of charge.

This new system of magic does have any prerrequisites and is open to the general public. There are two levels. Unlike Emergentus, one does not need any previous background in Aqualead energy. A short wand is needed.

Sabine
I am an author and Aqualead Master, and the founder of the International Center of Aqualead. I channelled Aqualead in Buenos Aires, Argentina on August 30th, 2008. I am originally from Canada. Visit the website www.aqualeadinstitute.org for more information about this new energy. I later founded Silgerond Press in August 2013, in order to self-publish my own books. 'The Story of Aqualead: A New Healing Energy for a New Earth' is my new book, which will be published by January 2014, latest.